Benjamin Franklin wore many hats. Apart from being a founding father and a politician, he was an author, a postmaster, a scientist, an inventor, and a diplomat. How did he squeeze all that into a day?

Not having Netflix must have helped his productivity, but his ability to get so much out of his day was a result of discipline and building a routine. Many biographers noticed this trait when they evaluated the lives of major historical figures.

Naturally, we found that he wrote down his routine in his book, The Art of Virtue. 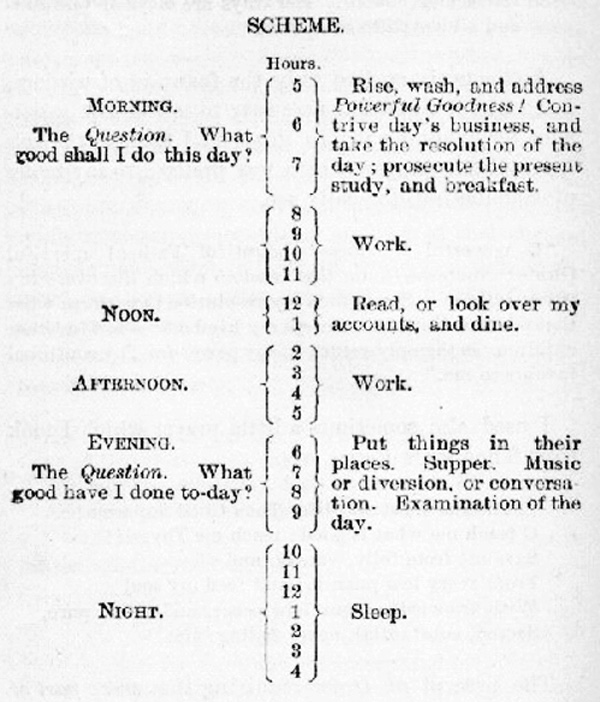 Let’s break down the reasons why this is a great routine:

The Power of a Routine

Routines are powerful because they remove us from having to make mundane decisions, so we can focus on larger challenges. One of President Obama’s famous productivity hacks is to limit his wardrobe choices to a blue or a grey suit, as he told Vanity Fair:

You’ll see I wear only gray or blue suits,” [Obama] said. “I’m trying to pare down decisions. I don’t want to make decisions about what I’m eating or wearing. Because I have too many other decisions to make.”

Artists and writers are notorious for their routines. Ernest Hemingway used to get up at 5:30am and write on his standing desk (another modern fad that isn’t really modern at all). Mozart and Beethoven also started their days early to work on their music.

So as you think about ways to be more productive at work, consider writing down a routine and following it. It might just get you on the twenty dollar bill one day.