I’m a self-taught programmer. Three years ago, I graduated as a Chemical Engineer in India, clueless about what I wanted to do in life. Today, I work as a developer at Shopify in Toronto.

Now the first thing many people ask me is ‘how did you end up working with Shopify when you were still in India?’

I’ve been one of those “passionate programmers” for some time now (although I did not know squat about software development until a little over 2 years ago). In March of last year, while freelancing as a developer back home, I started to consider working at some interesting startup; one where I could learn a lot.

After reading this interview with Shopify’s CEO, Tobi, I was sold; especially after seeing his answer to “What’s your goal for the company?” So I started following the company’s work a little bit. After looking up the expectations of a ‘Developer Intern’ position on their jobs page, Shopify started to seem like the perfect company to work for.

But there were a few problems. The courses I’d taken in university had nothing to do with software development and I only had one year of experience developing. I knew little about the languages and tools I would be required to work in (Ruby, Rails, etc). In short, my resumé would’ve been quickly rejected by Shopify, or any other software company. To add to these problems, Shopify wasn’t looking to hire remote workers, let alone from distant India.

All I had under my belt was proof of a lot of real work, passion towards the things I was working on, and a vision of what I wanted to be doing in future. Thankfully, Shopify cares mainly for these things and not a resumé (in fact, I was never even asked for my resumé).
Given all the constraints though, it was really unlikely that I could work there — even though I felt I’d be a really good fit. Then, something very interesting happened.

This obviously caught my attention. I remember not understanding anything about what he’d just tweeted. But I really wanted to give it a shot. I started looking up ‘DCPU16 emulator’ and slowly understood that it was some sort of a virtual CPU belonging to this computer game called ‘0x10c’. I then started looking into how CPU emulators are made, which then required learning about what assembly language was, what it does, and so on, and so forth.

The whole thing was very intimidating. It took me a few days to just understand what everything actually meant. But with a little drive and push, it all worked out. It ended up being a really fun experience which involved downloading tons of new information in my brain. I wrote the DCPU16 emulator in Ruby and sent the link to him.

Here’s the actual email that I’d sent to him: 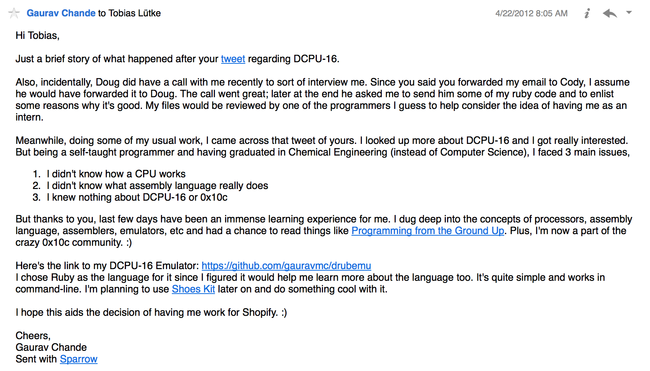 Within a few hours, I got his response:

Tobi’s response made my day. It was followed by a series of interviews with the hiring team and other senior devs over Skype. One month later I started working as an intern, remotely from India. Since then, I’ve begun working full time as a developer here, and moved to Toronto earlier this year (to get rid of time difference woes).

When you really want something, all the universe conspires in helping you to achieve it.

Life took a crazy turn towards more wonderful things because of pushing to get to where I felt like being. I truly believe that the smallest decisions can literally change our lives sometimes. What small decision will you take today? You know, the one that will get you from being where you are to where you want to be. I’d love to know if this story helped you in any way. :)

Oh, and by the way, Shopify is hiring! http://www.shopify.com/careers

This post first appeared on his blog and has been republished here with the author’s permission.

Gaurav Chande is a software developer at Shopify. You can read more from Gaurav on his blog.

Roles for AI Engineers and Scientists in Financial Institutions

Managing a Software Career
How to Master the Technical Interview at Google and Facebook
9 Things I Learned as a Software Engineer
What is a Unicorn Startup?