They all graduated with a degree in English.

Despite the success of these English majors, most are unclear about the different paths available to them. The truth is that the skills learned studying English (and other majors in the humanities) qualify graduates for a wide variety of jobs in different areas. This article focuses on those opportunities.

Note: Throughout this article, we have linked career paths to our curated career channels, so by clicking through, you can get a sense of the real jobs underlying each career path, and what they entail.

We performed a survey of user profiles with a focus on professionals that graduated within the last 10 years from a liberal arts school with a major in English. The survey validated our hunch that professionals went on to pursue a wide range of careers.

What Types of Companies do Graduates Choose? 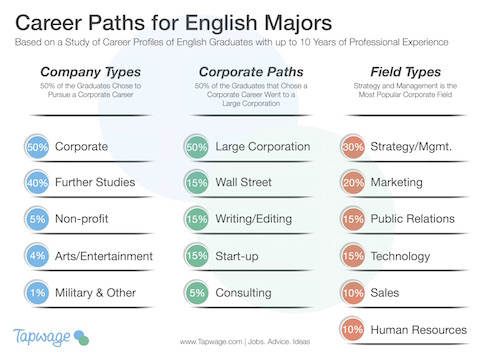 A Tapwage Analysis of Career Paths Followed By English Majors

It’s quite a mix. Unlike a career in business that is geared towards a specific vertical, English majors have a wide range of choices out of the gate.

About half the graduates we surveyed chose to pursue a career in the corporate world, while nearly 40% decided to pursue further studies (consistent with the findings of the Georgetown Center for Education and the Workforce study, that we covered earlier). The remaining 10% were divided between careers in non-profit (including teaching) or freelance careers in the arts and entertainment.

Among the graduates that chose to pursue further studies, law and English were popular.

In the non-profit world, graduates largely chose to teach, although a few became research associates, program directors, and publicity officers.

Where People Start Isn’t Where They End

People typically spent 1-3 years in a job with frequent switches in jobs, and fields. Some career transitions were predictable, but many were not.

People with initial jobs in fields like law, software programming, finance or academia, tended to build on those experiences and rise to positions of seniority. We saw limited field switching here.

The graduates who started with creative, writing or freelance jobs had very interesting career turns. Many chose to pursue marketing or sales. Some chose jobs in public relations, which often built on their skill sets. A few went into strategy consulting or senior management at large companies.

There weren’t a lot of graduates who went directly into the military, but those that did went on to very successful corporate careers, ranging from senior strategy roles at video game companies, to consulting and corporate finance.

Academics didn’t always choose to become professors. Some decided to pursue economics and research, while some became editors of major publications.

Fields That People Ended Up In

Most professionals settled into a field around the 4-year mark of their career, or after a couple of job changes.

General management, business development, strategy and marketing were ended up being popular fields. As professionals built experience, they ended up taking on senior roles within companies.

Public relations is another popular field, and many of those professionals started off in writing or editorial jobs.

There were more than a handful of professionals that pursued software from the outset. Similarly, there were also graduates that pursued finance and achieved senior finance roles at banks and other corporations. These specific fields require domain expertise, and graduates who were successful at them tended to specialize and spend their entire careers in that field.

Human resources was also well-represented, but didn’t place as high on the list as one would have thought.

Careers Beyond the Survey

This survey captured many of the careers that we expected to see. A few that we didn’t see, but are also open to English majors are:

It’s hard to predict if you are destined to be a Fortune 500 CEO, a presidential candidate, or a major late night comedian, but regardless of what you choose to do, you should find comfort in knowing that there are many paths to success. So get prepared for the adventures that await you.

The Ideal Major for Investment Banking and Other Career Questions
From Studying History to Making History: The Potential Careers of History Majors
7 Rules for Writing a Killer Resume
Managing a Software Career